Studies continue to demonstrate the effectiveness of low-level laser therapy in treating pain. Not only does it compare favorably against more traditional modalities such as electric stimulation, but it also has new applications, such as not simply treating but also preventing pain from the side effects of chemotherapy. New research also shows that low-level laser therapy may be used in conjunction with cortisone treatments. 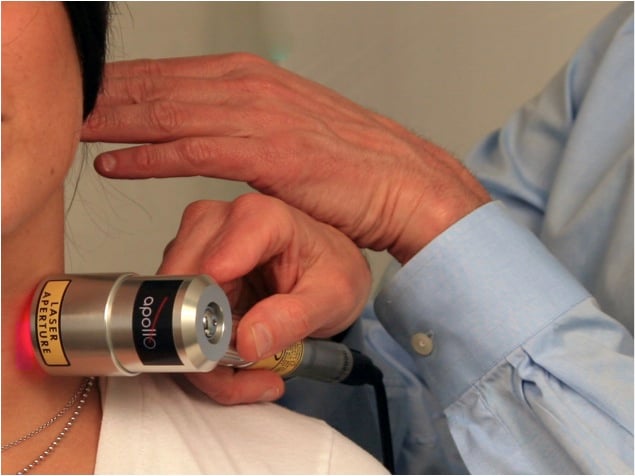 The aim of the study was to evaluate and compare the effects of low-level laser therapy (LLLT) with interferential current (IF) in the treatment of complex regional pain syndrome (CRPS, or sometimes called RSD, reflex sympathetic dystrophy syndrome). CRPS is a severe and chronic pain condition that has few successful medical interventions.

Preventing Pain from Chemotherapy Side Effects

Oral mucositis (OM) is a very painful side effect of chemotherapy. Patients who have received high doses of chemotherapy, either alone or in combination with total body radiation, often cite OM as the most debilitating side effect. Prior studies have shown that LLLT can treat OM and provide significant relief and speed healing. However, no previous study has looked at trying to prevent OM before it begins.

The researchers followed 42 patients who underwent stem cell transplant with radiation and chemotherapy. In the LLLT group, 57.1% of patients had no pain when they received LLLT prior to treatment, whereas in the control group, only 4.8% of patients were free of pain! The results demonstrate that laser can not only heal this serious problem, but it can even prevent it.

Cortisone and LLLT: A Synergistic Relationship

At one time it was thought that LLLT was ineffective when used with cortisone. Newer studies are showing that LLLT actually may have a synergistic effect with cortisone. This animal study aimed to assess the effect of LLLT associated with and without dexamethasone on inflammation and wound healing in surgical wounds.

The results showed that LLLT and dexamethasone acted in a similar pattern to reduce acute inflammation. Collagen synthesis and tissue healing were more intense in the laser group and LLLT was effective in reducing swelling and accelerated repair, even in the presence of dexamethasone.

Curtis is an internationally known expert in the field of laser therapy and author of "Light and Laser Therapy: Clinical Procedures," the authoritative text on clinical laser treatment. He has used lasers for 27 years, is the author of four books and more than 20 journal articles, and has lectured at many chiropractic colleges and state associations. He also studied various types of soft-tissue therapy with Janet Travell, MD; David Simons, MD; and Karel Lewit, MD.