The Application of Whole Body Vibration

When skeptics hear the term “vibration” a red flag goes up, because that is a common term used in pseudoscientific jargon. Vibrations are often used to refer vaguely to energy or some physical or even spiritual property that cannot be detected, and is used in a hand-waving manner to explain extraordinary claims.

Vibrations, however, are also a real thing, referring to physical oscillations. Whole body vibration therapy (WBVT) refers to these legitimate physical vibrations. It is being offered as a treatment for balance, back pain, neurological disorders, and also simple fitness. Does it actually work, however, for the indications claimed?

WBVT is considered a passive exercise modality, in which something is being done to the person, rather than the person actively engaging in an activity, such as walking, weight lifting, or swimming. With WBVT users lay, sit, or stand on a platform that vibrates rapidly in one or more directions. The idea is that the rapid vibrations force the muscles of the body to contract in reaction, providing a form of exercise.

Actually, the idea of using physical vibrations as therapy is probably much older, going back to the 19th century. However, research using modern WBVT machines is about 15 years old.

There are two basic categories of whole body vibration – physiotherapy simply uses vibrations to stimulate tissues, but not induce actual exercise. Whole body vibration training, however, uses the vibrations in combination with positions that induce muscle exercise, and should essentially be looked at as a form of physical exercise. Various types of vibration can be used. Lineal refers to up and down movement. Pivotal refers to a “teeter-totter” movement. Either can also be high or low frequency.

Regardless of mechanism, the primary question is whether or not WBVT is an effective intervention. This question has to be asked for every individual use – WBVT by itself or combined with other forms of exercise and therapy, for each specific indication, and for various outcomes.

Let’s take the most basic question first – does WBVT have added benefit to regular exercise? This 2007 review by a group stated:

"Preliminarily, there is strong to moderate evidence that long-term whole-body vibration exercise can have positive effects on the leg muscular performance among untrained people and elderly women."

Preliminarily, there is strong to moderate evidence that long-term whole-body vibration exercise can have positive effects on the leg muscular performance among untrained people and elderly women.

Looking through the specific studies, including some later than these reviews, that is generally what is found. The studies are mostly preliminary and tend to find that WBVT has some benefit for leg strength, specifically knee extension, but overall no significant difference than regular exercise. This makes sense, as the knee-extension muscles (quadriceps) are exactly those that would seem to be most exercised by standing on a vibrating platform. 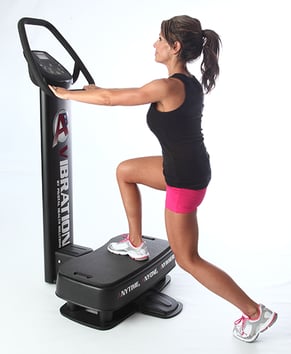 Next up is bone density. This can be a serious problem in older individuals. It has already been demonstrated that weight-bearing exercise is beneficial to bone density. Perhaps WBVT is another option, a  2011 systematic review found.

Again, there seems to be a benefit for leg strength, but no specific benefit for bone density in women.

What about older subjects as a subgroup? Read more from this 2012 systematic review.

Whole body vibration training may improve strength, power and balance in comparison with a control group, although these effects are not apparent when compared with a group that does conventional exercise.

This is another theme in the research results – WBVT works as a form of exercise for improving leg strength, but no better than other more conventional forms of exercise.

WBVT has also been looked at in patients with specific problems. In patients with lung disease, for example, either COPD or following lung transplantation, there seems to be benefit for walking endurance. This could simply be a leg strength effect, however.

WBVT is also being marketed at neurological populations, with the implication that it can positively affect neurological function beyond leg strength. In multiple sclerosis, however, the evidence so far is unimpressive, as stated in this 2015 review.

Quality assessment revealed that the WBV training protocols were heterogeneous and the methodological quality of the studies was generally poor. We found borderline indication for improved 2-6 min walking endurance [ES=0.25 (95% CI=-0.06-0.0.55)] favoring WBV training whereas no benefits were indicated for short-distance (20m or less) walking speed or balance.

What about balance and walking overall? This 2015 review found gives great information.

Although balance and mobility appeared to be responsive to WBV-plus-exercise, particularly in lower-functioning patients, compared with WBV-only, caution is required when interpreting the findings. Although there is some evidence for an overall effect of WBV on selected balance and mobility measures, its impact remains inconclusive.

There is insufficient evidence of the effect of WBV training on functional performance of neurodegenerative disease patients. Also, there is insufficient evidence regarding its beneficial effects on signs and symptoms of the disease, body balance, gait, muscle strength and quality of life compared to other active physical therapy or passive interventions in Parkinson’s disease or multiple sclerosis.

Conclusion: Putting it all together

The simplest way to make sense of the entire research literature on WBVT, is this – WBVT provides exercise to the legs, especially the thighs. This may improve strength, endurance, and walking. It does not appear to be superior to other forms of exercise, or to add much to a regular exercise program. It does not appear to have any specific benefits for bone density.

WBVT is a reasonable intervention to study, and it seems that more high quality studies are needed before we can definitely conclude its ultimate effects. However, existing evidence argues against any dramatic or specific benefit from WBVT.

The trap to avoid with this and other similar interventions is to fail to separate out specific from non-specific effects. WBVT is exercise, and provides the expected benefits of exercise, without providing any additional or novel benefits. For some, however, it has the allure of novelty, with the suggestion that it will provide some benefit beyond regular exercise. Certainly those marketing WBVT machines exploit this phenomenon.

I think it is beneficial to our understanding, to guiding research, and to evaluating interventions to understand what they actually are, and to not get distracted by their superficial or gimmicky aspects.

WBVT may be useful as a form of exercise, but it does not appear to have any specific or unique benefits beyond that.

This blog was curated from an article written by Steven Novella on October 14, 2015 and was published on sciencebaesdmedicine.org and can be found here.