The drop table is becoming standard in most chiropractors’ offices. Tables such as  pin-drop tables and PHS Chiropractic’s ErgoStyle Drops Tables are changing the way chiropractors perform adjustments. Why? These tables offer a safer way for each chiropractor to deliver care. With less fatigue by the end of the day, chiropractors are able to perform adequate adjustments to all patients. Julie Duck of ChiroEco.com breaks down how drop tables work and why they should be standard in your practice.

The drop table would probably have never been invented if Dr. J. Clay Thompson had subscribed to this saying. As the by-chance inventor of the drop table, Thompson created a way of adjusting that has become part of the chiropractic profession, allowing patients to receive comfortable adjustments that are also comfortable for the DC to perform. The drop table is now standard in most chiropractic practices, and even the original tables created by Thompson himself are still in use at his Alma Mater, Palmer College of Chiropractic.

Birth of the drop table

The history behind the drop table is interesting, and if there are no such things as accidents, this surely is representative as such.

As a Palmer student, Thompson purchased a used table with a broken headpiece. Because the headpiece would drop slightly when a thrust was delivered, Thompson began achieving great results. He only realized what a difference the “drop” made after purchasing a new table with a sturdy, stable headpiece. His patients verbalized their dislike of the new table, causing Thompson to think twice about his old table, the broken headpiece and whether it was related to his patients’ favorable results. The outcome, in turn, was the invention of the drop headpiece, and subsequent development of the Thompson Technique.

What makes the drop table so special? Its mechanism is based on the First Law of Motion by Newton that states “A body is in equilibrium if no force is acting upon it. If it is at rest, it remains so; if in motion, it persists in motion, unless an opposing force is met.” This law was the catalyst for a safer, low-force, high-velocity adjustment that was kinder to the DC. Additionally, the drop table allows DCs with smaller frames, such as women, to perform adjustments without becoming fatigued when the day is done.

A technique for the drop-table 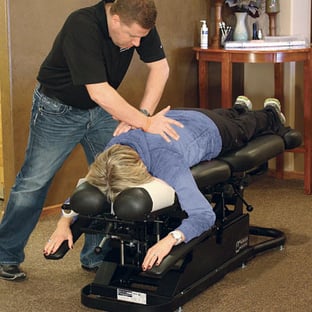 It was only natural for Thompson to develop an adjusting technique to accompany his drop table creation. The Thompson Technique, designed to be used with the Thompson Table, utilizes a leg check to pinpoint vertebral subluxations. It consists of five categories that will identify whether the problem exists in the cervical or lumbo-sacral region, as well as help you to order each adjustment:

The Thompson Technique is very effective when used with the drop table. However, the drop table also lends itself to many other techniques such as Gonstead, SOT, Diversified and Logan Basic, only adding to its versatility in the chiropractic practice.

When compared to its predecessors, the flat table, divided table, spring lift, side posture table, knee chest table and others, the drop table makes sense because it provides you with a simple transition between your analysis of the patient and the phases of adjustment. Combined with the Thompson Technique, you are then provided with a guidance system to follow when adjusting the patient, leading you through a series of checks and balances that helps simplify your ability to adjust.

Drop tables are also kind to you and your patients in need of extremity adjusting. The drop feature allows you to manipulate most of the body’s joints with reduced physical demand on your part, while also being less demanding on your patient.

Additionally, because the physical stress placed upon you is greatly reduced, especially on your shoulders, you can feel confident that at the end of the day you won’t be dragging because your table has the “give” you need to bring a more sensible order to your daily routine. 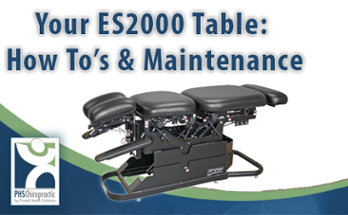