"What’s that knot and why does it hurt so much when you press on it?”  If you spend any time doing soft tissue work, you have inevitably heard this come out your client’s mouth.  When looking at the body and its sources of dysfunction, muscle tissue is the main target for the wear and tear of daily activity.  Our skeletal muscles accounts for nearly 50% of our body weight and depending on how you divide them out, consist of 200 paired muscles.  That’s 400 muscles, any of which can develop those “knots” or trigger points and cause significant pain and dysfunction throughout the body.

The existence and documentation of the “knots” or myofascial trigger points has been around for quite a long time but our understanding of them has evolved piece by piece.  Because of their uncharacteristic presentation, they have been discovered numerous times under a variety of names with the modern theory of myofascial trigger points taking shape in 1942 thanks to Janet Travell.

Your next question might be - What happens to the muscle to cause a trigger point?  The pathology of trigger points is that they arise from some sort of overload to a muscle.  This overload can arise from several different sources including:

These sources can occur in a variety of settings from occupational, athletic, to other underlying pathologies.  The overload to the area does not have to be physiologic.  Psychological and emotional stresses can also cause an overload to an area.

The typical progression of trigger point formation starts with an inactive point in healthy tissue.  Due to these previously mentioned stresses, the point evolves into a latent trigger point and, as the stress continues to build, an active point.  This evolution can work in both directions.  Trigger points can be activated by other points, emotional distress, and diseased organs and joints.  They can also revert to an inactive or latent status with rest and the removal of the other perpetuating factors.  This cycle can repeat itself for years.

Unfortunately, there is no gold standard for the pathology behind trigger points.  The current etiology combines two widely accepted theories, energy crisis theory and motor endplate hypothesis.  This hypothesis postulates that a central myofascial trigger point consists of several muscle fibers that are demonstrating regional sarcomere shortening due to an excessive and uninterrupted release of acetylcholine through a positive feedback loop.  If we were going to outline the steps in the formation of a trigger point, it would look like this:

Regardless of the cause, the referred pain from trigger points is described as a poorly localized, steady, deep, general aching in the muscles and joints.  This distinguishes it from the tingling, and numbness associated with nerve problems and the throbbing pain of vascular dysfunction.  Both motor and autonomic functions can be disturbed by trigger points.  Some motor disturbances include spasm, weakness, loss of coordination and fatigue in the involved muscle while autonomic disturbances can range from abnormal sweating, to watery eyes, excessive salivation, dizziness, and even tinnitus.  This can often lead to a misdiagnosis since muscles in general and more specifically trigger points are often overlooked as a source of pain and dysfunction in the modern medical world. 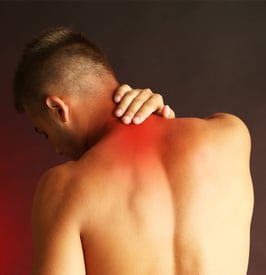 So now that we have a better understanding of what causes a trigger point, what approach should you take to treat it?  Trigger point therapy is basically divided into invasive and non-invasive modalities.  Depending on your profession, invasive methods include anesthetic injection, botulinum toxin injection, or dry needling but they might be out of your scope of practice.  More likely than not, you will utilize a non-invasive method such as stretching, ultrasound, transcutaneous electrical nerve stimulation (TENS), or digital pressure.

Your goal for treatment is to release the sarcomere contraction.  When using digital pressure, once you locate the point, apply pressure to a tolerable level for the client (usually about 7 out of 10).  Maintain the pressure for 30 to 90 seconds or until you feel the tissue release or soften.  The client will often describe a decrease in symptoms as the point releases.  Ninety second holds produce the best results but 30 seconds is sufficient to produce a change.  You should increase the pressure back to the tolerable level and repeat the process until the nodule is no longer palpable or the complaints have diminished.  You should avoid treating the same area for more than 5 minutes because you don’t want to irritate the tissue.  Since the trigger points can consist of multiple fibers, a good practice is to change the angle of pressure to make sure the entire point is addressed.

There are some modifications you can make to increase the effectiveness of digital pressure, particularly if you work in the sports setting and are treating athletes in competition.  You may have noticed that when you apply pressure to a trigger point, the client will experience discomfort and a feeling of paralysis of the area.  While they are definitely not paralyzed, they often struggle to engage the muscle while you are compressing the point.  The pain will disrupt the neuromuscular coordination in the area causing the difficulty.  If you can incorporate active movement along with the digital pressure, the trigger point will dissipate quicker and you can re-establish communication between the nervous and muscular systems improving the function of the muscle.  Just have the client perform the action of the muscle the trigger point is located in and after a few repetitions, there will be a noticeable change.  This technique is particularly valuable with athletes.  Aggressive trigger point treatment prior to competition can have a negative impact on performance.  You can modify your approach by incorporating movement, reducing the amount of pressure used, and shortening the treatment time to impact the dysfunction in the area without hindering performance. 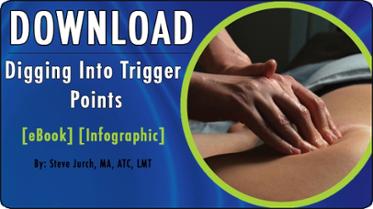 Steve Jurch, A.T.C., L.M.T., has over 20 years’ experience as a massage therapist and athletic trainer. He serves as director of health and human services at Community College of Baltimore County, in Maryland. An NCBTMB-approved continuing education provider, he is the author of a clinical massage therapy textbook and is on the Editorial Review Operational Committee for the AMTA Journal.